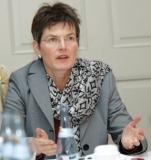 Marsilius projects emerge from the intensive dialogue and collaboration of the fellows within the Kolleg. Thus academic collaborations of the fellows can be transformed into long-term research consortiums. All Marsilius projects delve into questions of theoretical and practical relevance, which require the interaction between representatives of different scientific cultures. In this way, the Marsilius Kolleg wishes to establish a research-based network between the life and natural sciences, and the social sciences, law, and humanities.

Three projects have been successfully completed:  “Human Dignity”,  “Perspectives of Aging”, and “The Global Governance of Climate Engineering”. Four further projects arose as a result of intensive discussions of the Marsilius Kolleg Fellows: the project "Ethical and Legal Aspects of Total Genome Sequencing" began in March 2011. The projects “Embodiment as paradigm of an evolutionary-cultural anthropology” and “Equality and inequality in liver allocation” began in April 2013, the project Early Childhood in Transition in spring 2018. All four projects were approved by the Rectorate at the recommendation of the selection committee and two external reviewers. To obtain an objective assessment, the reviewers were suggested by the Leopoldina Nationale Akademie der Wissenschaften and the Berlin-Brandenburgischen Akademie der Wissenschaften.